These days Halloween brings out some of the the best holiday decorations and some of the worst. To me, the best show some thought in their creation. Cemetery scenes complete with gravestones. Pumpkins arranged artfully on a porch. Skeletons dancing from tree limbs. Spiders crawling along the porch.

One detail underlies them–all the elements that comprise the scene are in proportion with each other. Sure, the spiders may be a little larger, but there are large spiders in real life, think tarantulas. 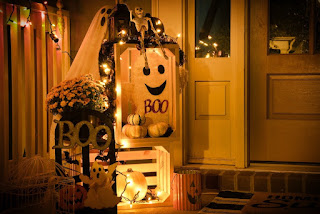 And then there’s what I like to call “dysfunctional yard art.”

Or what retailers calls, “Inflatable Blow Up Stuff.” Well, they use descriptors like inflatable ghost or pumpkin, but you get the idea.

This inflatable crap comes in every possible Halloween shape and size. I’ve yet to see any rhyme or reason to how folks scatter the stuff across their front yard. No creative thought hinders the decorating process. Just blow up whatever you bought this week and put it into the yard. 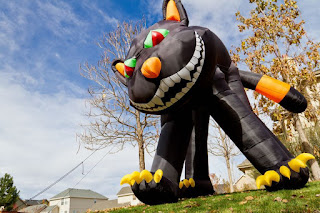 Thus, a one-foot spider stands beside a seven-foot pumpkin with a two-foot trick or treater lurching toward the front porch. Which is, of course, framed with the nine-foot haunted house archway.

Often during the night, disaster strikes. The arrival of morning reveals the bobbing inflatables have…deflated. A bloodless massacre fills the yard which is littered with mounds of flattened witches, ghosts, pumpkins, and skeletons. A deflated heap of bright plastic colors.

That’s not all that flattens these inflatables, there’s also the problem of a pop-up thunderstorm. Wind and rain are no friends of inflatable decorations. If the homeowner fails to deflate the figures, the storm takes care of it.

Since people persist in filling their yard with this stuff, the least the manufacturers could do is offer their customers a starter kit. This kit could contain a scene of proportional Halloween figures for the decorating impaired. The company would probably increase their sales with these kits. They could also include a scene schematic. This way the person who insists this is the best way to decorate a yard might actually achieve some sort of picturesque scene that compliments each inflatable.

If you haven’t guessed, I believe size does matter when you fill your yard with inflatable blow up stuff.

Posted by Mabel Tuckingham at 1:39 PM