There sure are a lot of folks around here who don’t seem to understand basic physics. Remember this law? For every action there is a reaction?

Action: Slam on the brakes of your car.
Reaction: It skids to a stop.

Problem is, the stuff IN the vehicle keeps on moving at whatever speed the vehicle was going. So you’re humming down the road at 60 mph and a deer runs in front of you. SLAM! You hit the brakes. The car skids to a stop, but guess what? You, and everything else in that car, keeps going at 60 mph.

This basic law of physics is the reason seat belts and air bags were invented. To keep folks from eating the steering wheel or going through the windshield head first.

Seems to me, folks would respect physics and secure all the passengers in the car.

Oh, no, not my Peaches. She’ doesn’t need a safety harness. She just loves to sit in my lap and look out the window.

Yes, I hate to admit it, but there are some good ole boys around here who have let their lives be ruled by little bitty dogs.

As you can tell, I’ve got problems with folks who think it’s okay to have their cute little dog standing on their lap. It’s usually small dogs since the larger ones squash your legs and make it hard to even see out the wind shield, but still, do you really want your Pomeranian crushed when you ram into another vehicle and the air bag deploys?

Because, another law of physics. In order to protect the driver those things blast out at oh, 100 mph upon impact. Blink your eye and its over. As is your dog.

Or how about folks who think it’s cute to let their dog stick his head out of a vehicle window? Think of the crud blowing into their eyes and ears at 20 mph. Multiple that by more damage if you’re going 50 or 60 mph. What about a rock tossed up by a passing truck? If it can dent your car’s windshield, think of what it can do to your dog’s head

Don’t even get me going on folks who put their dog in the bed of a pick up truck. Again, basic physics. For every action there’s a reaction. Slam on the brakes and yes, the dog somersaults out of the truck to death. Or permanent maiming. One of my neighbors crippled his beautiful Golden Retriever when she was thrown out of the truck bed. 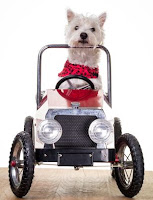 Jocko loves to ride in the car, but he’s always secured to a harness in the back seat. I even bought him a little dog booster (yes, they have them for dogs!) seat so he can see out of the side window.

Be a good dog guardian. Secure you pet in the car (Mr. Tibbs said to be sure an keep cats in a carrier and strap it in). Think about how you’d feel if you slammed on the brakes maimed or killed your dog.

Posted by Mabel Tuckingham at 1:55 PM No comments: