Quit Your Whining and Get Vaccinated

If I hear, “oh, they made it too fast” one more time, I’m going to bop somebody upside the head. It’s not like the drug companies made the COVID-19 vaccines in a garage–although good things, like Apple computers, have come out of garages. Then again, people make meth in garages and some folks suck it up without complaining about how long it took the drug dealer to make it. 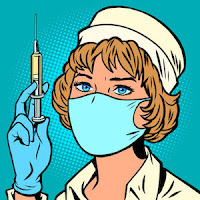 As for the COVID-19 vaccines, they were actually made by folks who know what they’re doing. Vaccines have been around since the 1700s, although early vaccines were a lot more scary than what we have now.

Back to the whiners. Here’s the main problem with so many slackers, you’re affecting the rest of us and ensuring the virus and its variants will be with us for a very long time. Truth is, most of you whiners would been dead before you hit 40 years old if visionaries hadn’t figured out that vaccinating people saved lives.

Raise your hand if you got measles, mumps, whooping cough, diphtheria, tetanus, or polio shots. All in all, I doubt there are many U.S. citizens who haven’t had multiple vaccinations during their life. Shots that kept them from contracting debilitating and deadly diseases.

According to an old school record, by the time I was a year old, I’d had smallpox, diphtheria, whooping cough, and tetanus vaccines. Which means my brothers and I got measles and mumps as kids. I remember getting the polio vaccine in elementary school. Yep, they just lined us up and gave it to us. By the time I got it, they were soaking the vaccine in a sugar cube. So we ate the vaccine.

My dad was in the Navy and he got orders for an accompanied tour to Malta when I was about 8 yrs old. That meant he could bring his family. I don’t know how many weekly visits to the medical clinic we made to get all sorts of shots.

I probably got a smallpox booster shot because it hadn’t been eradicated worldwide yet. In case you didn’t know it, eradicating small pox was a tremendous feat of modern medicine and global cooperation. Imagine defeating a horrible disease that killed or disfigured millions of humans for centuries. Traces of small pox have been found on Egyptian mummies so it had a long run.

Years later, I accompanied my Army spouse on a tour to Germany. Another round of shots for me and our daughter. Not nearly as many as I got to travel to Malta, but it was twenty years later.

When I learned a vaccine for shingles and pneumonia was waiting for me when I hit the right age bracket, there I was, sleeve rolled up! I tripped and cracked my knee cap a couple of years ago. Was my tetanus up to date? Nope. Not a problem, here’s my arm! They gave me a DTap for tetanus, diphtheria, and pertussis in the ER.

Just one of the lovely vaccines we have to fight infection and disease. All brought to you by medical researchers and infectious disease doctors. I don’t know why some people seem to think these guys just sit around twiddling their thumbs while various diseases run rampant.

Can you picture yourself running toward the outbreak of a disease like Ebola? That’s what many infectious disease doctors do. They go to hotbeds of disease to get data about the disease. Then medical researchers use that data to research and often create vaccines or medications that will help control the disease.

mRNA type vaccines such as the Pfizer and Moderna vaccines may be the newcomers on the block, but Dr. Katalin Kariko, an immigrant who escaped communist Hungary in 1985, was key in researching their use. Soon after arriving in the U.S., she began her research into mRNA vaccines. In those early years her work was overlooked and she was repeatedly refused government grants. Fortunately for humanity, she persevered in her research.

Maybe some folks think 35 years is too fast for vaccine development.

Dr. Kariko shared her research and others also began following the mRNA path. All the research in the world doesn’t help if you’re told it’s not the traditional way to create a vaccine and you’re denied funding for clinical trials.

Then along comes a pandemic and the wealthy countries throw gobs of money at you because suddenly the world needs a vaccine against a deadly virus. You’re in the right place at the right time and the research you’ve been doing for years provides plenty of data for vaccine companies. And there’s the funding you could never get.

There have always been people against vaccines for one reason or another. Had everyone listened to them, the life span of the average human would still be 40 years.

Is that the world you want to live in?

Posted by Mabel Tuckingham at 10:25 AM No comments: