I read somewhere that a good salesman can convince a customer she needs whatever he’s selling. Sure as shooting, this is the first lesson taught in sales class. I’m just guessing here since I’ve never been to a real how-to-get-people-to-buy-stuff class.

It seems a good door-to-door vacuum cleaner salesman (sorry about the historic terminology, but I did say last century) doesn’t walk into the customer’s home and think:

This person doesn’t need this wonderful but pricey vacuum cleaner. Lord knows she ain’t got that much to vacuum.

Real quick like, I learned feeling sorry for your customer 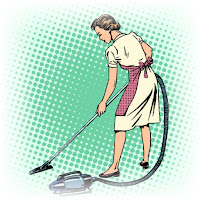 Gotta admit, this attempt to sell stuff was an eye opener for me. I was right young when I discovered what a lousy salesperson I was. Which pretty much slammed that door in my face. But as y’all know, when one door slams shut another one opens. Not sure what door opened way back then, but I did study journalism rather than marketing in college.

On the other hand, having been on the sales end of the stick, I’m wise to the ways of salespeople. This came in real handy when Jeb and I were renovating our house many years ago. The sales rep of a popular brand of windows tried to convince me to buy his windows over another brand.

Bless his heart, his windows were less expensive than the ones I wanted. And the cost of renovating the house was eating our lunch, so saving money was a good thing. Problem was, we wanted windows that opened from the top. And this guy didn’t have any that did.

When he wasn’t able to convince me how great his windows were, he tried using the old “Dr. So and So over in Rich People’s Subdivision had a bunch of our windows installed in his house. He’s right happy with them.”

Now I was glad for Dr. So and So, but I wasn’t fixing to live in his house so I really didn’t care what windows he had put in. Right fast, I put the squash on that move with a very polite-don’t-give-a-hoot, “You don’t say.”

The window rep finally recognized defeat when he saw it. That’s another aspect of sales I don’t miss, doing all that talking and not making a sale.

Then again, being a rotten salesperson led me right out of sales into the newspaper world. Which pretty much assured I’d never have the money to buy an expensive vacuum cleaner, either.
Posted by Mabel Tuckingham at 11:58 AM No comments: